I'm sharing this rough draft of a poem-in-progress today because I think many of you fellow cat lovers can relate. I'm not happy with the first stanza so any suggestions are welcome. : )

She didn't write a letter
she didn't make a list—
but that sneaky cat of mine
had a secret Christmas wish.

She curled herself up cozy
beneath the tinseled tree
waiting there for Santa
and presents brought for me.

When I woke up this morning
ready for a surprise—
it wasn't what I expected
I couldn't believe my eyes.

The bows were all chewed
ribbons torn and tattered
boxes emptied on the floor—
paper ripped and scattered.

Unashamed of what she'd done
I heard her start to purr—
I guess that silly cat believed
the gifts were meant for her. 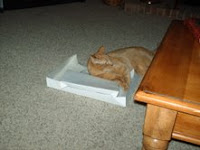 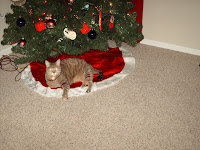 May the season bring you
many delightful surprises!

As many of you know, Lee Bennett Hopkins has been named the newest recipient of the NCTE Award for Excellence in Children’s Poetry. I can’t think of anyone more deserving of this award.

Ten years have passed since Lee published three of my poems in his Worlds of Poetry series. I'd used his anthologies in my classroom for many years but never expected to see my name in one of them.

I had sent Lee a poem called “Stars” that I wrote about my two sons. He wrote back to me saying he would hold on to it until he found a collection where it fit. I thought he was just being kind, and didn’t think I’d ever hear from him again.

A few months later, the phone rang and I heard, “Hi, Linda, this is Lee Bennett Hopkins.” I couldn’t believe my ears! Lee Bennett Hopkins was calling me to ask if he could use my poem in his new collection. He said, “See, I told you I believed in that poem and would find a place for it.” I can’t remember much more of our conversation, but I’ll never forget how thrilled I was. As soon as I got off the phone, I ran to tell my sons, then I called everyone else I knew to tell them the news. I was going to be a published poet!

It was almost a year before the series was published, and I got my first look at the books. Lee had included not one, but three of my poems. My name was in the same book as some of my favorite poets: J Patrick Lewis, Rebecca Kai Dotlich, Jane Yolen, Lee Bennett Hopkins, among others. It was a dream come true!

But Lee had more surprises in store for me. Not only did he include my poems; he recommended me to speak at a teacher's conference in Long Island. I can't begin to describe that experience other than to say, I was treated like a celebrity. Thanks to Lee, I got to live the dream of being a guest poet for a day.

I finally got to meet Lee a few years ago. He greeted me with the warmth of a dear friend. He has a way of making you feel like the most special person on the planet. Once again, I was overwhelmed by the experience.

Over the years, there have been many times when I've stopped sending poems out because I didn’t believe in myself. Just about the time I’m ready to give up, an email or letter arrives from Lee with a call for poems for a new collection. I don't know how he does it, but he always seems to know when I need a boost to get going again.

I've been blessed to have poems in several of Lee's anthologies. There is nothing more exciting than the arrival of a new collection that I've contributed to. Seeing one of my poems in Lee’s books gives me hope that someday, if I work hard enough, I might have a collection of my own published. His encouragement and support has changed me as a writer. Knowing he believes in me, inspires me to write the best poems I can write.

Lee Bennett Hopkins has brought poetry into the lives of children and classroom teachers. He has given countless aspiring poets a chance to see their work published, and his generosity of spirit goes beyond words.

So, if you’re reading this Lee, congratulations for a job well done and a life well-lived.
Posted by Linda at 3:11 PM 5 comments: