While browsing the picture book shelves at my local Borders, I came across a little book of haiku called Dogku by Andrew Clements. The haiku tell the story of a little dog, Mooch, who wants a permanent home. Here's an example:

Mooch sits below, looking up.

Who has more patience?


I can just imagine the fun young children would have with this book. The warmth of the poems and expressive illustrations make the reader fall instantly in love with Mooch. I know it will inspire older students to write their own haiku stories.

I especially like the Author's Note at the end of the book where Mr. Clements explains what a haiku is and encourages kids to write their own. He compares writing haiku to choosing a small vase, a small container to place the perfect words to express what you most want to say. What a great way to think about haiku or any poetry.


After reading Mooch's story, I decided to try writing a dog haiku (dogku). I started thinking about friend who volunteers at an animal shelter telling me that older dogs are rarely adopted. This is what came to mind:


on adoption day
puppies beg, “Pick me, pick me!”
hoping- a new home

Read more about Andrew Clements and his over fifty books for children: http://www.andrewclements.com/ 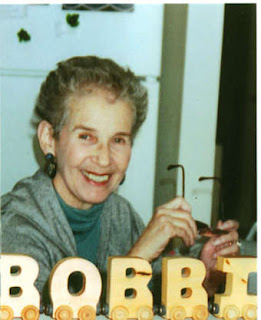 Bobbi Katz is the author of numerous books of poetry and professional books for teachers. Her collection of American history poems, We the People, was named an ALA Booklist Top Ten Poetry Pick. A prolific and versatile writer, her poems are widely
anthologized.

I met Bobbi about twelve years ago at a state reading conference. I was a big fan of her poetry and had used many of her poems in my elementary classroom. So naturally, I was thrilled when she graciously agreed to an interview with me. Recently, I contacted her to update the interview for National Poetry Month.

Linda: How did listening to jazz as a child influence your writing?

Bobbi: I think my love of rhythm and rhyme came from the delight I had as a very young child, certainly pre-K, to the syncopation and delightful lyrics of Fats Waller tunes. Opportunities for hearing music weren't frequent, but perhaps in an era before sensory overload was the rule hearing a song had a greater impact than it would now. I remember the delicious taste of words I didn't properly understand. I remember making those words my playmates.

Linda: How did you get started as a children's poet?

Bobbi: I started writing rhyming funny, quizzical verse for a friend's child, who simply was not "getting" reading. Suddenly things clicked! I totally lost touch with him when his family moved across the country soon after that. He came to visit me years later, when he had finished medical school at Stanford University.

Linda: When young writers say they have trouble finding topics to write about, what advice do you give them?

Bobbi: Ideas are everywhere, if we slow down enough to observe the world around us and within us. What am I seeing, hearing, feeling?

Linda: Do you keep a journal?

Bobbi: Yes. I think journal-keeping is one of the best things anyone can do! It's a great help for someone who wants to write, of course. I don't have any rules about what enters my journal. Sometimes there's an idea for a poem or essay & sometimes, especially now when my memory is less than wonderful, it's a place to jot down an appealing new word or the name of someone whose work I'd like to read or see/hear. A journal is a place for resting, for placing one's feelings. It can be very therapeutic.
.


Linda: What are some of your upcoming poetry projects?

Bobbi: I have three books coming out in 2009: THE MONSTEROLOGIST: A MEMOIR IN RHYME. An anthology of poems by various poets, including me titled MORE POCKET POEMS, and finally NOTHING BUT A DOG. The last title is actually a reissue of a picture book about my own daughter's yearning for a dog that was published by the Feminist Press in the 1970's. Dutton is having the text re-illustrated. The editorial assistant who computerized the text wondered what made it a feminist book. My daughter was an active girl, who played the trumpet, rode a bike, went fishing, climbed trees and did things that most publishers weren't comfortable having a girl do. Things have definitely changed!

Linda: Do you always write poetry?


Bobbi: While, I've been accumulating poems on three different subjects that are very content-research oriented, plus other poems that just say "Write me!" I have been wanting to write another biography rather than commit to an extensive collection of poems. I've been exploring several interesting people but the chemistry hasn't been right. I just did a reading from Trailblazers:Poems of Exploration. It goes from Adam and Eve to the Mars (robotic) Rovers, with well over 60 less mythic personalities in between. As with We the People, all of the poems are written in the first person. I tried to learn a lot about the explorers and the people with whom they interacted. I read journals, letters, and primary sources, whenever possible, so that each poem would have a distinctive voice or voices. To create the sense of individuality for the reading, I invited an adult man and a teenage boy and girl to read with me and I created a matrix of connecting material. I read one poem and suddenly I knew that I'd simply love to write about that person. Maybe it was the energy of reading for an audience that gave me that clear knowing. I don't think anyone has written more than a few paragraphs about her! And I know from experience that if I talk about it, the book won't get written!

Linda: I've used your teacher resource poetry books (Poems Just for Us, American History Poems, etc. for many years in my classroom. Do publishers assign you the topics, or do you write a proposal?

Bobbi: Most of the time, I write for Scholastic Professional Books. My editor asks me to write about a particular topic, but often the publisher knows my interests. I'm a grammar grouch, and so it was logical to ask me to write 25 Great Grammar Poems. I often write poems for more than one voice. My current book is Partner Poems for Building Fluency.

Linda: What advice can you give someone like me who dreams of having a collection of her own published someday?

Bobbi: Write, write, write, as often as you can. I am a great believer in letting poems marinate. I print them out and put them on a corkboard. And revise. And revise. Because getting published is so very difficult, try to write about what delights you, what interests you, what pleases your ear and tickles your tongue. When you've written a bunch of poems, see if a subject or an audience is emerging from them. Whom do you expect to hear or read your poems? Does a particular publisher seem open to poetry? Alas, the reality is that many publishers aren't accepting unagented manuscripts these days; however, some certainly are! The most important thing to remember is the joy of writing: the pleasure of the craft. That way no matter what happens as far as commercial publication; you'll have gained something very important. I used to turn my nose up at the idea of self-publishing. Although I've never done it, I think it's not such a bad idea. With illustrated books, an unfortunate choice of illustrator can knock the words right off the page. I've seen some writers for adults make a success of books they've paid to have published. If your dream is to write for kids, however, I think that the Society of of Children'sBook Writers and Illustrators (SCBWI) can be very helpful. Try to get to one of their meetings in your state. It's a way to get feedback on your work & to meet editors as well.

Linda: Tell us a little about your writing day.


Bobbi: I usually start my day by doing yoga for a half an hour or more, which I started doing once a week as exercise about 25 years ago. It's become a great centering tool for me. Then I have a cup of tea and write for a few hours on my laptop. Sometimes the few hours stretch into more than that and I don't stop until I get a headache and realize I haven't eaten. After a hardy brunch/breakfast, I'll do a few chores; take a shower, or something to rest my eyes. If I'm doing a project that requires research, I usually do that in the afternoon.

Linda: Is writers' block a problem for you?

Bobbi: I find that the worst problem that I have is Email. It swallows up so much time.

Being a cat lover, a favorite poem of mine and my students (both elementary and middle school) is “Cat Kisses” posted with permission by Bobbi Katz.

Sandpaper kisses
on a cheek or a chin--
that is the way
for a day to begin!

Sandpaper kisses--
a cuddle, a purr.
I have an alarm clock
that's covered with fur.

Daisy and Butterscotch are the best listeners. They like to sit beside me on the sofa and watch me write on my laptop. They're very patient as I read each new rewrite of my poems. They especially like the poems about them. Here's a tanka I wrote about Butterscotch.

Butterscotch is almost ten years old, but he still runs to the door every time I come home. I know he's happy to see me.

It's been a busy month so far. I've been working hard to share poetry with my students and fellow teachers. This week I'm doing a workshop on writing poetry inspired by art. I found some great examples of artwork on the internet. I wrote a quick cinquain using a Mary Cassatt painting "Little Girl Sitting in Blue Arm Chair." I haven't thought of a tile yet, but I sure do remember hearing the words, "Wait til your father gets home!" Check out the painting. If it inspires you, I hope you'll share your poem with me. http://www.postershop.com/Cassatt-Mary/Cassatt-Mary-Kleines-Maedchen-im-blauen-Fauteuil-1004518.html


Middle schoolers are very creative so I can't wait to see what they come up with. I'll share some of their poems later in the week.
I just finished taking Laura Purdie Salas' wonderful Writing Nonfiction for the Educational Market class. Wow! She is a fantastic teacher! Laura gives each of her students one-on-one attention and is generous in sharing resources and information needed to get stared in educational writing. I learned a lot about the business. I plan to send out my first Introductory Packet by the end of the week.
Linda
Posted by Linda at 7:06 AM No comments: